skip to main | skip to sidebar

GET CREATIVE: TURN ON THE BRIGHT SIDE OF YOUR BRAIN

GET CREATIVE: TURN ON THE BRIGHT SIDE OF YOUR BRAIN by cartoonist Doug MacGregor is a fun workbook of creative exercises for the right side of the brain.

Doug MacGregor recently spoke at a local writer's meeting and I was intrigued by the sample exercises he led us through during the presentation. A few weeks after the meeting I bought the book and the creative exercises have helped wake up my right brain and fill my big, blank pages with words.

Posted by Paula Watson at 7:00 AM No comments:

JUST TAKE MY HEART is another entertaining mystery by Mary Higgins Clark. In this story, a famous actress is murdered in her home and her estranged husband becomes the primary suspect, but he is not charged with her murder until two years later.

Once Gregg Aldrich is formally charged, Emily Wallace, the assistant prosecutor, begins spending hours preparing for the trial and she finds herself needing a dog sitter. When a new neighbor offers to help, she gives him a key to her house to take care of her dog and unknowingly puts her own life at risk.

A quick, easy read with some courtroom drama and a few unexpected twists and turns.

Posted by Paula Watson at 6:30 AM No comments:

A Bold Fresh Piece of Humanity

A Bold Fresh Piece of Humanity is the autobiography of Bill O'Reilly, executive producer and anchor of The O'Reilly Factor on the Fox News Channel. The author points out in the introduction that he parted from the traditional memoir method to focus on those experiences that shaped his belief system. This lets the reader know up front that the book is not the typical examination of one's life laid out neatly in chronological order. Instead, the book is divided into topical chapters laced with pertinent stories about his experiences.

Since I'm a fan of the television show, I enjoyed reading those stories while learning how the events influenced his belief system. It was also interesting to read about events that happened in previous decades from his perspective. Some things I agreed with and some I did not. Did it dramatically improve my life as claimed in the introduction's title? No. Did it cause me think about the events that shaped my own belief system? Yes.

Fans of The O'Reilly Factor will enjoy the book. Critics will not.

Posted by Paula Watson at 3:00 PM No comments:

Going Rogue is Sarah Palin's memoir. Although scrutinized and criticized to the nth degree, I enjoyed the book. I wasn't looking for the errors, exaggerations, and "gotcha" moments I'd heard so much about from mainstream media since the book was published. I was looking for the story of the ordinary woman who became the 2008 vice presidential candidate. The woman who believes in many of the same things I do.

I wasn't disappointed. I learned a lot about how the people and situations in her life led to that momentous event. I also learned a lot about Alaska, a state at the opposite end of the spectrum from my state of Florida. And, I enjoyed the stories and the photographs inviting me into her life.

The parts that talk about the campaign and the events since losing the election that have been so vehemently attacked in the media did not appear to be vindictive to this reader. They were written from her perspective so of course they are subjective to her perception of reality. Isn't that how we all see things? From our own reality.

Conservatives and even many independents will enjoy this look into Sarah Palin's life. Liberals will continue to be outraged.

Posted by Paula Watson at 7:00 AM No comments: 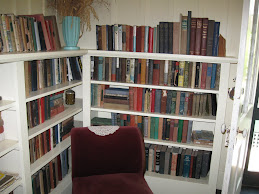